Today, I saw a horse who raced in my favourite horse race ever.

No, I didn’t see the winner of the 2014 Gulfstream Park Handicap (GII).  After all, this weekend I am making my first foray to Fair Grounds — not Three Chimneys Farm.

But, I did get to see Narvaez in person.  He finished fifth behind Palace Malice in the Gulfstream Park Handicap (GII) almost three years ago…perhaps an ambitious placing on the stretch to a mile, but he was coming right off a surprise second-place finish as a 139/1 outsider in the Gulfstream Park Sprint (GIII).  Strike while the iron is hot, right? 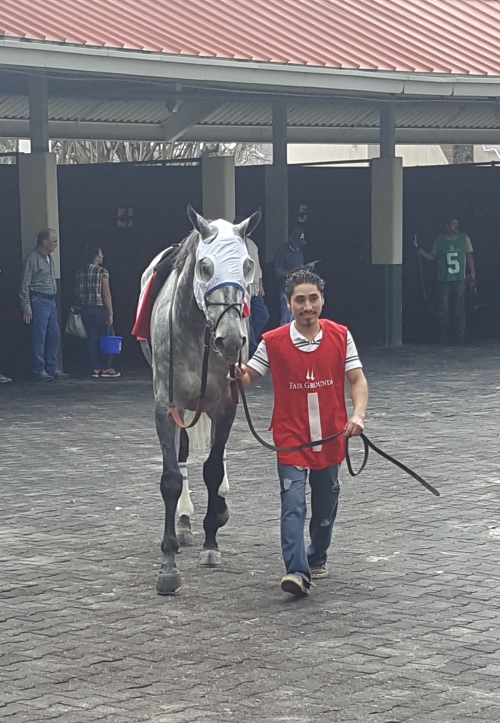 Though the seven-year-old gelding now runs in the claiming ranks and not graded stakes, the son of Holy Bull is still a gorgeous grey. 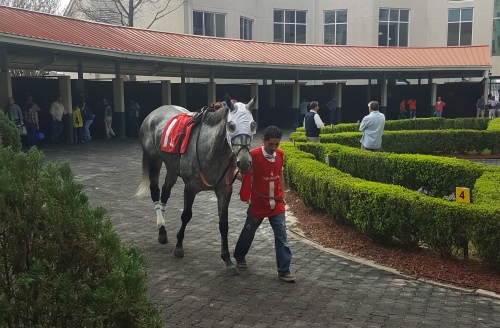 Back in 2014, he had been in the barn of Agustin Bezara, for Stipa Racing Stable, Inc.  He has changed hands a few times since then, and made his fifth start today for trainer Bret Calhoun.  Calhoun had claimed him out of a sixth-place finish last August at Saratoga.

Today, Robby Albarado had the call to ride.  Albarado had been aboard for three of Narvaez’s last four starts.  By the time he got the leg up on the grey gelding, Albarado had notched his career win total up to 4,996.  Narvaez would not put Albarado over the mark, but perhaps he would help get him one step closer?

Narvaez went off the 6/5 favourite in the field of seven, as it was his first time dropping down into $7,500 claiming company.  He tracked inside for most of the race, made a game rally in between horses, but Rasta Rant (9) just outfinished him.  Narvaez crossed the wire second, beaten just a neck. 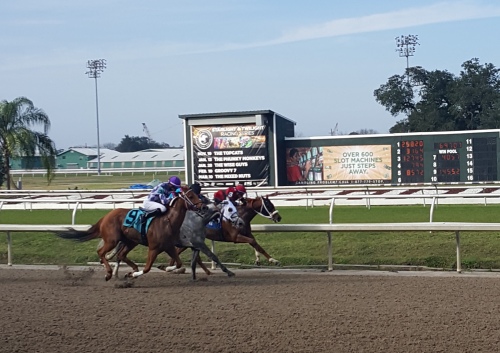 Narvaez got a bath afterwards, but would return to the barns with different connections.  Owner Bosharon Stable and trainer Jeff Engler claimed him out of the race.

Good to see you in person, Narvaez.  Thanks for reminding me of the race I love so much from so long ago…and thanks for the game effort today.