Last weekend, I headed back out to Tampa for a few days of horses and friends.  A few of my pictures from my trip were published in my article at Brisnet.  But, I got far more pictures than that…so come, take a look, and enjoy a long weekend at Tampa Bay Downs!

Broadway Brett puts on his serious face before his race on February 9.

Something Kinky is a serious racehorse…who will do just about anything if she thinks she’s going to get a peppermint out of it. 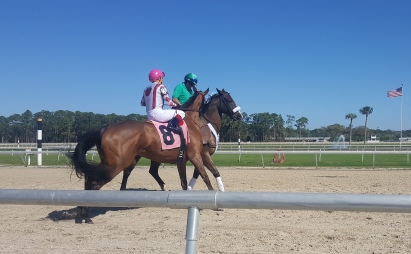 Gabrielle’stoblame, a Blame half-sister to Kentucky Derby winner Nyquist, finished fifth on debut after acting up in the paddock, the post parade, and behind the gate.

I finally got to see a Musketier baby race in person: Mousquetaire ran in Thursday’s 4th race. Musketier was such a durable horse, and I hope he gets enough of a chance to prove himself at stud. I worry, though, given the disconnect between the “results now!” attitudes in the stud market and the likelihood that Musketier’s babies will be better with age.

McCraken and one very happy Brian Hernandez after their victory in the Sam F. Davis (G3).

Kasaqui schools in the paddock two days before finishing second behind Inspector Lynley in the Tampa Bay Stakes (G3).

My Mertie relaxes in her stall. She didn’t race the weekend I was there, but ran second in the Minaret Stakes the following Saturday.

Looking out over the Tampa Bay Downs paddock during morning works. 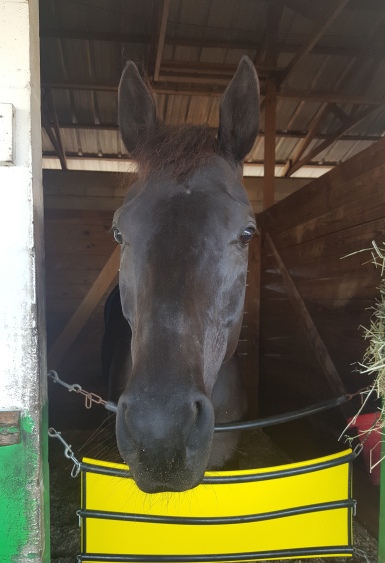 Devil’s Rose, hoping for a mint or two, pokes her nose out of her stall.

Treating one of my favourites, Big Tom Prado, to a delicious peppermint. (Photo credit: Michele Boyce)

An up-close view of the engine that Isabella Sings uses for all those games of catch-me-if-you-can. 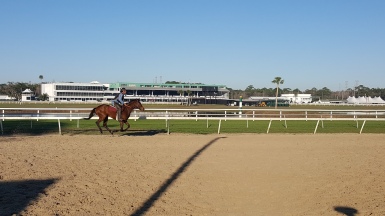 Taking in some morning workouts at Tampa Bay Downs.

Chicago Style, after running his career record to a perfect two-for-two. He is not Illinois-bred, but is owned by Chicago-connected outfit Glen Hill Farm.

On Sunday, February 12, all eyes were on Monaco, a $1.3 million dollar auction buy at OBS March last year. He may not have put it all together yet, but he trounced a soft field by a dozen lengths. 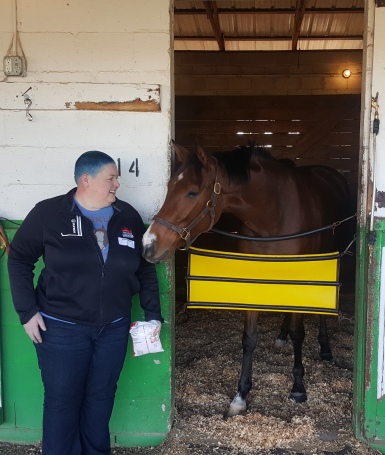 Illinois-bred Brazyn Appeal leaves the paddock after being claimed to the barn of trainer Ron Potts.

There’s no rule against making goofy faces on the backside, right? Nate the Natural hopes not… 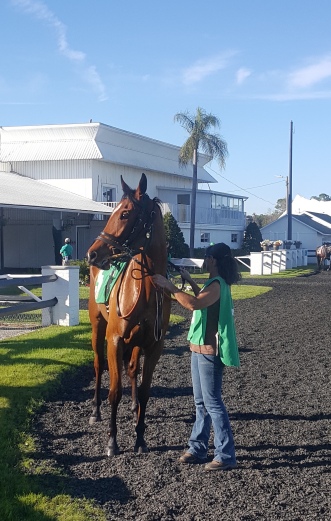 I loved the impression Strayana made in the paddock. She had the poise of a supermodel.

Blue Sky Kowboy looked like a million bucks…and proved, despite his gate antics, that he could run with million-dollar horses, too. 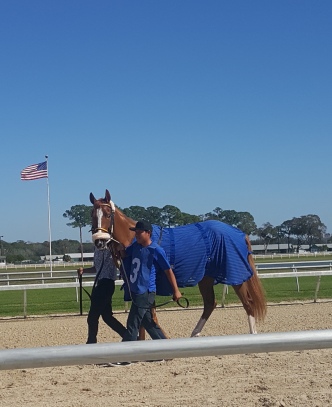 I rarely see Curlin babies in Chicago, so whenever I get to see one in person, it’s a treat. Red Curls made her second career start on the Sam F. Davis undercard, and finished a solid third. 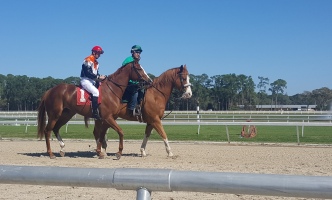 No Cats Allowed has a flashy enough blaze, but her pony looks like he stuck his head in a paint bucket.

The sun begins to set as Miss High Tide, the final winner on the Sam F. Davis Day card, makes her way into the winners’ circle.

Awesome Magic failed as the heavy favourite, but his blaze is still a winner.

Tampa Bay Downs mascot Mouse had her tail braided for Sunday’s appearance in the family area. 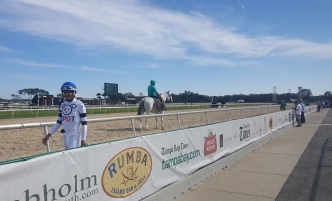 I did not have cat treats. I did have a camera. Kitten is displeased.